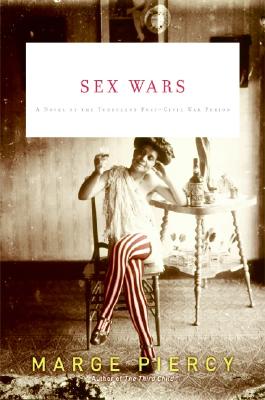 A Novel of the Turbulent Post-Civil War Period

Post-Civil War New York City was the battleground of the American dream: an era of vast fortunes and crushing poverty; a time notorious for free love and the emerging rights of women, yet one that saw the rise of brutal sexual repression and the enforcement of prejudice. Though life was hard, the promise of change was in the air. Women were agitating for civil rights, including the vote. Immigrants were pouring into the city, bringing with them a new energy.

Embodying the times is Freydeh, a spirited young Jewish woman from Russia. Living in a tiny tenement flat with eight others, Freydeh juggles numerous jobs to earn passage to New York for her beloved family. Then she learns that her younger sister is adrift somewhere in the city and begins a search that carries her through brothels and prison.

Interwoven with Freydeh's story is a vividly wrought account of such real-life heroines -- often at odds with the law as well as societal customs -- as Elizabeth Cady Stanton, Susan B. Anthony, and Victoria Woodhull, the first woman to run for president and an activist for sexual freedom. They were tireless fighters who strove to elevate the position of all women. Depicted as well is the fundamentalist crusader Anthony Comstock, who fought to eliminate sexual expression, pushing for the passage of laws that still haunt our legal system.

In the tradition of her World War II epic Gone to Soldiers, Marge Piercy re-creates a turbulent period in American history witnessed through the lives of its most notorious figures and explores the changing attitudes toward women, minorities, religion, and sexuality in nineteenth-century America, a land of sacrifice, suffering, promise, and reward.


Praise For Sex Wars: A Novel of the Turbulent Post-Civil War Period…

"Piercy does beautifully render some of the details of women's lives in the 1860s."
-Naomi Wolf in ELLE

"A novel that will please historical fiction fans."
-Library Journal

"Fascinating and only too relevant...Piercy has a gift for conjuring the texture of an historical era."
-Washington Post Book World