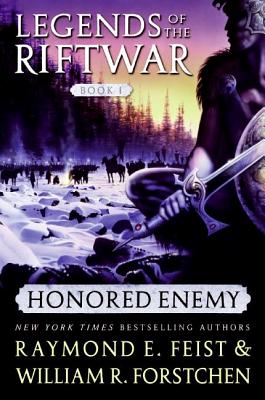 Legends of the Riftwar, Book 1

In the frozen Northlands of Midkemia, Captain Dennis Hartraft’s Marauders have just had a disastrous encounter with their sworn enemy, the Tsurani. Wounded and disheartened, the Mauraders set out for the shelter of a frontier garrison. They don’t know that a Tsurani patrol is sent to support an assault on that same garrison. Arriving simultaneously, the Marauders and Tsurani find the outpost already overrun by a dark enemy whose ferocity is legendary in Midkemia. In order to survive, the foes must band together and fight as one.

As they make their way across the inhospitable climate, the two batallions struggle not only with the elements and their enemy, but also their consciences. Can their hatred for their mutual enemy overcome their distrust of each other? And, with both sides carrying painful scars from past wars, what is more important: one’s life or one’s honor?


Praise For Honored Enemy: Legends of the Riftwar, Book 1…

“[A] compelling and profoundly moving tale… an invaluable addition to a beloved canon.” — barnesandnoble.com

William R. Forstchen, author of several dozen books in the fields of science fiction, history, and historical fiction, resides in western North Carolina. He holds a Ph.D. in history from Purdue University and is a professor of history at Montreat College. His works include the coauthored, New York Times bestselling series Gettysburg, written with Newt Gingrich, the Lost Regiment series, and the award-winning We Look Like Men of War, a novel based on his doctoral dissertation about an African American regiment in the Civil War. He spends most summers in Mongolia, doing archaeological and historical research, and his current hobby is the restoration and flying of a replica P-51 Mustang fighter plane.