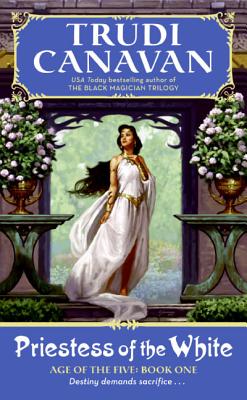 Priestess of the White

Age of the Five Trilogy Book 1

In a land on the brink of peace—watched jealously by a ruthless cult from across the sea and beset by hidden enemies—five extraordinary humans must serve as sword and shield of the Gods.

Her heroism saved a village from destruction; now Auraya has been named Priestess of the White. The limits of her unique talents must be tested in order to prove her worthy of the honor and grave responsibility awarded to her. But a perilous road lies ahead, fraught with pitfalls that will challenge the newest servant of the gods. An enduring friendship with a Dreamweaver—a member of an ancient outcast sect of sorcerer-healers—could destroy Auraya's future. And her destiny has set her in conflict with a powerful and mysterious, black-clad sorcerer with but a single purpose: the total annihilation of the White. And he is not alone . . .