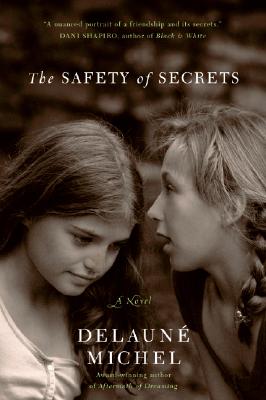 The Safety of Secrets

"Now we're just alike." So begins Fiona and Patricia's friendship that warm autumn morning in first grade in Lake Charles, Louisiana, their bond forged ever closer by Fiona's abusive mother and Patricia's neglectful one. Their relationship is a source of continuity and strength through their move to L.A. to become actresses; through Fiona's marriage and Patricia's sudden fame. When husband and career pressures exact a toll, the women wonder if their friendship can survive. Then a dark secret from their past emerges, threatening to destroy not only their bond, but all they've worked for as well.

The Safety of Secrets is a beautifully written exploration of the bonds forged in childhood and challenged decades later, of the fulfillment of dreams and the damage they can cause, and of secrets being uncovered and the truth we find inside.


Praise For The Safety of Secrets…

Funny and touching, this is a tale of childhood--and how it never ends.
— Cathleen Schine, New York Times bestselling author of THE NEW YORKERS

Written with tremendous narrative velocity, The Safety of Secrets is almost impossible to put down.
— Dani Shapiro, award-winning, best-selling writer

“DeLauné Michel has written a terrifically funny book with a very tender heart. It manages to be wonderfully confessional and psychologically mysterious. The Safety of Secrets is the perfect curl-up-on-the-couch-and-read-all-day-long kind of book. It stays with you.”
— Jill A. Davis, Author of Ask Again Later & Girls' Poker Night

“The Safety of Secrets is a funny, keenly observed, deeply moving story of coming of age too soon. DeLauné Michel’s elegantly structured novel jumps back and forth between an imperfect childhood in Louisiana, and a complicated adulthood in Los Angeles. .”
— Warren Leight, Tony-award winning playwright of Side Man

“a beautifully written book that takes you into the mind of a woman attempting the impossible; trying to make marriage, motherhood, friendship and a career as an actress all work in the gladiatorial ring of Los Angeles. DeLauné Michel writes with the precision and insight of an x-ray.”
— Merrill Markoe, New York Times best-selling author

Raised in south Louisiana, DeLauné Michel has worked as an actor and is the founding producer of Spoken Interludes, a reading series in New York and Los Angeles. Her short fiction has won awards. This is her first novel.

Lifelong friendships are treasured for the great joy that they bring. But they also bring great pain. Do you find yourself choosing sides with either Fiona or Patricia?

Fiona says that ending her friendship with Patricia would be “Like divorcing a sister. No, worse, a part of my self. Because without Patricia in my life, where would all those memories and experiences that we shared and lived through go?” (Chapter 15) Are those strong enough reasons for Fiona to stay friends with Patricia?

Why do you think Patricia is drawn to Fiona? And why does Patricia remain friends with Fiona?

When Fiona finds out that she is pregnant, she goes to Patricia’s home to tell her. She then lies to Neil that she didn’t tell Patricia the news. Fiona justifies this by telling herself that “It’s almost like she (Patricia) was here first, in terms of loyalty.” (Chapter 3) Is Fiona’s loyalty with Patricia appropriate? Does this loyalty justify Fiona’s lying?

When Fiona first sees her mother’s new haircut, she immediately wants it, too. “A pixie cut! The name alone was a ticket to join the land of fairies. I wanted to be a pixie.” (Chapter 5) But it isn’t until years later that she is finally able to get the haircut, long after she has stopped believing in pixies. Why does she cut her hair? To defy her mother or something else?

Before Fiona cut her hair, kids at school were already teasing her about her red hair. After she cuts it, she is even more afraid of what they will say. Should Patricia have tried to stop Fiona from getting it cut?

Why does Fiona’s mother become so enraged when she gets her haircut? Is it only because Fiona broke her rule or is it something else?

How does the punishment that Fiona’s mother comes up with set Fiona up for what happens to her at the end of the summer? Or does it?

Once Fiona is visibly pregnant, the way she is perceived in the world changes. She feels that “My entire old self has become invisible, and I wonder if I’ll ever see it again.” (Chapter 23) How much of that is a reality and how much is her own thinking? Did her experience after the haircut make her more sensitive to this?

Fiona struggles with how she sees herself once she is pregnant and motherhood is looming. How does her relationship with her mother play into that?

Fiona knows that her mother eavesdrops on Fiona’s phone calls with her father. “Though I doubt my father would be pleased if he ever figured it out. Or if I told him. But I won’t. Which my mother counts on. Colluding on the secret of her breaking my privacy.” (Chapter 10) Did Fiona learn to keep secrets as a way to get through life from her mother or did she learn it as a defense from her mother?

After Fiona’s mother punishes her, Fiona’s father “never mentioned the clothes. As if they weren’t there. As if what I looked like wasn’t there. I wondered if I would ever be seen by him again.” (Chapter 24) Why doesn’t Fiona’s father ever intervene?

Patricia defends telling their secret by telling Fiona that “It came out. I didn’t plan for it to, it just did. But it’s not like anyone knew it was you.” (Chapter 36) How much ownership did Patricia have of that secret? Was it her right to tell it when she wanted to?

Patricia asks Fiona the one question that Fiona has never wanted to face since that eventful summer. “Why didn’t you?” (Chapter 36) Was that the best thing for Fiona to hear or the worst?

After Fiona confronts her mother, her mother goes back to being the way she was before. But later, Fiona has a new understanding. “I suddenly wonder what it was my mother wanted that she never got. From the world and from her mother. And aren’t the two the same? At least to a small child.” What enabled Fiona to see her mother in that way?

Fiona and Patricia both came from abusive homes: Fiona emotionally and Patricia physically. How did each of their personalities develop in relation to those environments? And how did their careers and lives in Hollywood change who they are?

What does The Safety of Secrets reveal about the strength and fragility of human relationships?