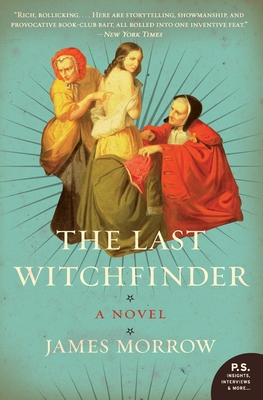 Jennet Stearne's father hangs witches for a living in Restoration England. But when she witnesses the unjust and horrifying execution of her beloved aunt Isobel, the precocious child decides to make it her life's mission to bring down the Parliamentary Witchcraft Act. Armed with little save the power of reason, and determined to see justice prevail, Jennet hurls herself into a series of picaresque adventures—traveling from King William's Britain to the fledgling American Colonies to an uncharted island in the Caribbean, braving West Indies pirates, Algonquin Indian captors, the machinations of the Salem Witch Court, and the sensuous love of a young Ben Franklin. For Jennet cannot and must not rest until she has put the last witchfinder out of business.


Praise For The Last Witchfinder: A Novel…

“This impeccably researched, highly ambitious novel -- nine years in the writing -- is a triumph of historical fiction.” — Booklist (starred review)

“Read[s] like a collaboration between Charles Dickens and Henry Fielding...Morrow is long overdue for a mainstream audience.” — Denver Post

“A book to delight fans of writers such as John Barth and T.C. Boyle. Or even Jonathan Swift.” — USA Today

“Grim and gorgeous, earthy and erudite as well.” — Seattle Times

“Morrow seamlessly weaves fantasy with science and historical fact in one of the best novels of the year.” — Rocky Mountain News

“This lively and thoughtful adventuer is filled with enough satire and plot to fuel two Mark Twain tomes.” — Pages Magazine

James Morrow is the author of nine previous novels, including The Last Witchfinder. He lives in State College, Pennsylvania.