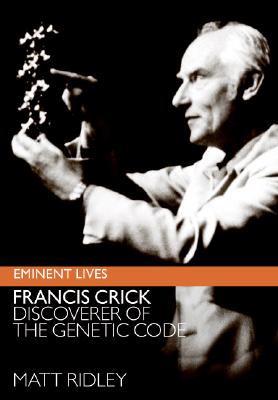 Discoverer of the Genetic Code

Francis Crick, who died at the age of eighty-eight in 2004, will be bracketed with Galileo, Darwin, and Einstein as one of the great scientists of all time. Between 1953 and 1966 he made and led a revolution in biology by discovering, quite literally, the secret of life: the digital cipher at the heart of heredity that distinguishes living from non-living things -- the genetic code. His own discoveries -- though he always worked with one other partner and did much of his thinking in conversation -- include not only the double helix but the whole mechanism of protein synthesis, the three-letter nature of the code, and much of the code itself.

Matt Ridley's biography traces Crick's life from middle-class mediocrity in the English Midlands, through a lackluster education and six years designing magnetic mines for the Royal Navy, to his leap into biology at the age of thirty-one. While at Cambridge, he suddenly began to display the unique visual imagination and intense tenacity of thought that would allow him to see the solutions to several great scientific conundrums -- and to see them long before most biologists had even conceived of the problems. Having set out to determine what makes living creatures alive and having succeeded, he immigrated at age sixty to California and turned his attention to the second question that had fascinated him since his youth: What makes conscious creatures conscious? Time ran out before he could find the answer.


Praise For Francis Crick: Discoverer of the Genetic Code…

“A considerably more complete and colorful portrait of Crick than has existed before.”
-Nicholas Wade, New York Times

“Lucid and riveting . . . Completely captivating, a lively and deeply intriguing account of one of biology’s most imaginative scientists.”
-Kay Redfield Jamison

“Matt Ridley’s book reads beautifully, the science flowing along with the life, to form a unity.”
-Aaron Klug

“This is a wonderful book--deeply substantive, lucid, trenchant, and witty. It tells the biggest story in modern biology.”
-David Quammen

“Ridley has captured the wonder of an unparalleled scientific mind at work and at play.”
-Nicholas Wade, New York Times

“Enjoyable…Ridley does an excellent job of escorting readers on [an] intellectual roller coaster ride.”
-BioScience