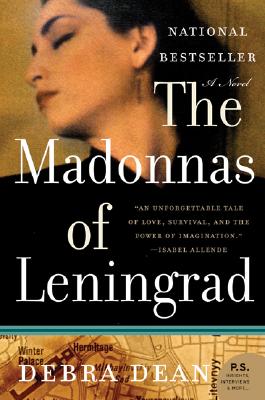 The Madonnas of Leningrad

“An extraordinary debut, a deeply lovely novel that evokes with uncommon deftness the terrible, heartbreaking beauty that is life in wartime. Like the glorious ghosts of the paintings in the Hermitage that lie at the heart of the story, Dean’s exquisite prose shimmers with a haunting glow, illuminating us to the notion that art itself is perhaps our most necessary nourishment. A superbly graceful novel.”  — Chang-Rae Lee, New York Times Bestselling author of Aloft and Native Speaker

Bit by bit, the ravages of age are eroding Marina's grip on the everyday. An elderly Russian woman now living in America, she cannot hold on to fresh memories—the details of her grown children's lives, the approaching wedding of her grandchild—yet her distant past is miraculously preserved in her mind's eye.

Vivid images of her youth in war-torn Leningrad arise unbidden, carrying her back to the terrible fall of 1941, when she was a tour guide at the Hermitage Museum and the German army's approach signaled the beginning of what would be a long, torturous siege on the city. As the people braved starvation, bitter cold, and a relentless German onslaught, Marina joined other staff members in removing the museum's priceless masterpieces for safekeeping, leaving the frames hanging empty on the walls to symbolize the artworks' eventual return. As the Luftwaffe's bombs pounded the proud, stricken city, Marina built a personal Hermitage in her mind—a refuge that would stay buried deep within her, until she needed it once more. . . .


Praise For The Madonnas of Leningrad: A Novel…

“An unforgettable story of love, survival and the power of imagination in the most tragic circumstances. Elegant and poetic, the rare kind of book that you want to keep but you have to share.” — Isabel Allende, New York Times bestselling author of ZORRO

“[A] heartfelt debut…[that] switches deftly between the siege and the present…[it is] admirably humane in its determination to restore the dignity Alzheimer’s strips away. What’s more, it largely avoids the sentimentality that mars so much writing about the old and infirm.” — New York Times Book Review

“Dean writes with passion and compelling drama about a grotesque chapter of World War II.” — People

“Rare is the novel that creates that blissful forgot-you-were-reading experience. This sort of transcendence is rarer still when the novel in question is an author’s debut, but that is precisely what Debra Dean has achieved with her image-rich book, The Madonnas of Leningrad.” — Seattle Post-Intelligencer

“Dean eloquently depicts the ravages of Alzheimer’s disease and convincingly describes the inner world of the afflicted. Spare, elegant language, taut emotion, and the crystal-clear ring of truth secure for this debut work a spot on library shelves everywhere.” — Library Journal

“A thoughtful tragedy that morphs into a tear-jerker in the third act.” — Kirkus Reviews

“An extraordinary debut. . . . Like the glorious ghosts of the paintings in the Hermitage that lie at the heart of the story, Dean’s exquisite prose shimmers with a haunting glow, illuminating us to the notion that art itself is perhaps our most necessary nourishment. A superbly graceful novel.” — Chang-Rae Lee, New York Times Bestselling author of Aloft and Native Speaker

“Dean merges past and present in prose that shines like the gilt frames in the hermitage.... this novel of memory and forgetting glows with love and hope.” — BookPage

“Elegant and poetic, the rare kind of book that you want to keep but you have to share.” — Isabel Allende, New York Times bestselling author of ZORRO

“…this is a novel that dares to be beautiful - and fully succeeds.” — Daily Mail (London)

Debra Dean worked as an actor in New York theater for nearly a decade before opting for the life of a writer and teacher. She and her husband now live in Miami, where she teaches at the University at Miami. She is at work on her second novel.

The working of memory is a key theme of this novel. As a young woman, remembering the missing paintings is a deliberate act of survival and homage for Marina. In old age, however, she can no longer control what she remembers or forgets. “More distressing than the loss of words is the way that time contracts and fractures and drops her in unexpected places.” How has Dean used the vagaries of Marina’s memory to structure the novel? How does the narrative itself mimic the ways in which memory functions?

Sometimes, Marina finds consolations within the loss of her short-term memory. “One of the effects of this deterioration seems to be that as the scope of her attention narrows, it also focuses like a magnifying glass on smaller pleasures that have escaped her notice for years.” Is aging merely an accumulation of deficits or are there gifts as well?

The historical period of The Madonnas of Leningrad begins with the outbreak of war. How is war portrayed in this novel? How is this view of World War II different from or similar to other accounts you have come across?

Even though she says of herself that she is not a “believer,” in what ways is Marina spiritual? How does her spirituality compare with conventional religious belief? How do religion and miracles figure in this novel? What are the miracles that occur in The Madonnas of Leningrad?

A central mystery revolves around Andre’s conception. Marina describes a remarkable incident on the roof of the Hermitage when one of the statues from the roof of the Palace, “a naked god,” came to life, though she later discounts this as a hallucination. In her dotage, she tells her daughter-in-law that Andre’s father is Zeus. Dmitri offers other explanations: she may have been raped by a soldier or it’s possible that their only coupling before he went off to the front resulted in a son. What do you think actually happened? Is it a flaw or a strength of the novel that the author doesn’t resolve this question?