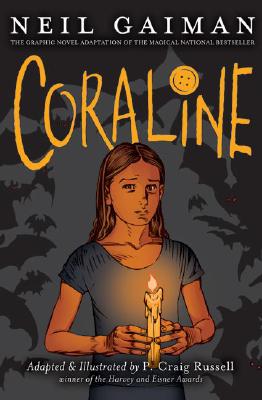 When Coraline steps through a door in her family's new house, she finds another house, strangely similar to her own (only better). At first, things seem marvelous. The food is better than at home, and the toy box is filled with fluttering wind-up angels and dinosaur skulls that crawl and rattle their teeth.

But there's another mother there and another father, and they want her to stay and be their little girl. They want to change her and never let her go. Coraline will have to fight with all her wit and all the tools she can find if she is to save herself and return to her ordinary life.

“A virtuoso adaptation…a master of fantastical landscapes, Russell sharpens the realism of his imagery, preserving the humanity of the characters and heightening the horror, even as Gaiman’s concise storytelling ratchets up the eeriness.”
-Booklist (starred review)

“This adaptation of Neil Gaiman’s novel reads as though it were intended for the graphic novel format in the first place.… Russell’s illustrations suit the tone of the story perfectly.
-School Library Journal (starred review)

“This graphic novel is as dark, creepy, and brilliant as anything out there.”
-Chicago Tribune