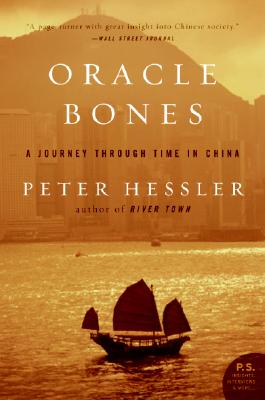 A Journey Through Time in China

A century ago, outsiders saw China as a place where nothing ever changes. Today the country has become one of the most dynamic regions on earth. In Oracle Bones, Peter Hessler explores the human side of China's transformation, viewing modern-day China and its growing links to the Western world through the lives of a handful of ordinary people. In a narrative that gracefully moves between the ancient and the present, the East and the West, Hessler captures the soul of a country that is undergoing a momentous change before our eyes.


Praise For Oracle Bones: A Journey Through Time in China…

“Everyone in the Western world should read this book.” — Publishers Weekly, (starred review)

“Hessler has written a fascinating and frequently moving account of life in modern China.” — Booklist

“A brilliant observer with a novelist’s ear for character and dialogue, Hessler is both fascinating and funny.” — Entertainment Weekly

“Insightful. . . . Hessler is a wry and witty writer who manages to bring humor even to tense situations.” — Christian Science Monitor