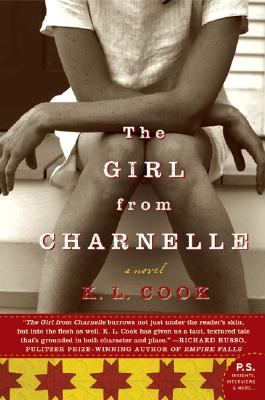 The Girl from Charnelle

It's 1960 in the Panhandle town of Charnelle, Texas—a year and a half since sixteen-year-old Laura Tate's mother boarded a bus and mysteriously disappeared. Assuming responsibility for the Tate household, Laura cares for her father and three brothers and outwardly maintains a sense of calm. But her balance is upset and the repercussions of her family's struggles are revealed when a chance encounter with a married man leads Laura into a complicated relationship for which she is unprepared. As Kennedy battles Nixon for the White House, Laura must navigate complex emotional terrain and choose whether she, too, will flee Charnelle.

A heartfelt portrait of a young woman's reckoning with the paradoxes of love—eloquent, tender, and heart-wrenching—K. L. Cook's unforgettable debut novel marks the arrival of a significant new voice in American fiction.


Praise For The Girl from Charnelle: A Novel…

“The story of an entire generation growing up too quickly…impossible to put down until the dramatic and realistic conclusion.”
— Library Journal, starred review

“The Girl from Charnelle burrows not just under the reader’s skin, but into the flesh as well.”
— Richard Russo

“Characters we care about—even grow to love—set inside a story that strikes deep, the way important novels used to do.”
— Bret Lott

“Cook is the best kind of storyteller—he creates compelling characters and dives deeply through the wreckage of their lives.”
— Hannah Tinti

“Expertly rendered in the hands of a writer who—if we live in a just world—will soonbe known throughout the country.”
— Silas House

“A deeply thoughtful and honest rendering of the unanswered questions of relationships and the nature of love.”
— Booklist

K. L. Cook won the inaugural Prairie Schooner Book Prize for his collection of linked stories, Last Call. His stories and essays have appeared in numerous journals and magazines, including Poets & Writers, Threepenny Review, Shenandoah, Witness, and American Short Fiction. He has won an Arizona Commission on the Arts fellowship for fiction, the grand prize in the Santa Fe Writers' Project Literary Arts Series, and residency fellowships to the MacDowell Colony, Yaddo, and Blue Mountain Center. He lives in Arizona and teaches at Prescott College and Spalding University's MFA Program in Writing.