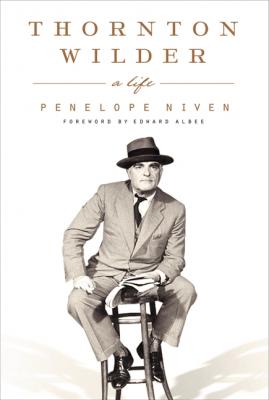 "Thornton Wilder: A Life brings readers face to face with the extraordinary man who made words come alive around the world, on the stage and on the page."
—James Earl Jones, actor

Thornton Wilder—three-time Pulitzer Prize winner, creator of such enduring stage works as Our Town and The Skin of Our Teeth, and beloved novels like Bridge of San Luis Ray and Theophilus North—was much more than a pivotal figure in twentieth century American theater and literature. He was a world-traveler, a student, a teacher, a soldier, an actor, a son, a brother, and a complex, intensely private man who kept his personal life a secret. In Thornton Wilder: A Life, author Penelope Niven pulls back the curtain to present a fascinating, three-dimensional portrait one of America's greatest playwrights, novelists, and literary icons.


Praise For Thornton Wilder: A Life…

“The author admits to a ‘decade of close study of . . . primary sources’ in preparation for her biography of distinguished American novelist and playwright Thornton Wilder. The result, fully displayed on every page of this definitive treatment, is a joyous presentation of detail.”
— Booklist (starred review)

“Fast-paced and engaging, this work is essential for academic readers with an interest in American literature and culture. It will also appeal to the more general reader of American biography.”
— Library Journal (starred review)

“Lucid, elegantly written...there is just enough shrewd literary analysis to make us understand why this prodigally gifted writer so richly deserves an audience beyond the 12th grade.”
— Daily Beast

“The best kind of literary biography, one likely to send the reader back (or perhaps for the first time) to the author’s works.”
— Washington Post

“Essential. . . . Studiously researched and measured. . . . The great strength of ‘Thornton Wilder: A Life’ is how well it fuses the early years of the Wilder biography with the themes that informed his works.”
— Chicago Tribune

“Niven complements her own clear, lyrical voice with the eloquent words of Steichen’s contemporaries.”
— New York Times Book Review on Steichen: A Biography

“This new biography of Wilder -- comprehensive and wisely fashioned -- gives us sufficient view of his methods, his public and private life, and the reaches of his mind…This book is a splendid and long needed work.”
— —Edward Albee

Penelope Niven is the author of critically acclaimed biographies of poet Carl Sandburg and photographer Edward Steichen, as well as Swimming Lessons, a memoir, and Voices and Silences, coauthored with the actor James Earl Jones. She is the recipient of three fellowships from the National Endowment for the Humanities, the Thornton Wilder Visiting Fellowship at the Beinecke Library at Yale, and other fellowships and awards.