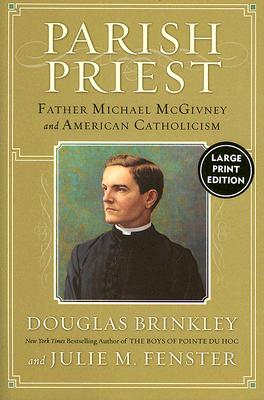 In Father Michael McGivney (1852-1890), born and raised in a Connecticut factory town, the modern era's ideal of the priesthood hit its zenith. The son of Irish immigrants, he was a man to whom "family values" represented more than mere rhetoric. And he left a legacy of hope still celebrated around the world.

In 1882, Father McGivney founded the Knights of Columbus, an organization that has helped to save countless families from the indignity of destitution. From its uncertain beginnings, when Father McGivney was the only person willing to work toward its success, it has grown to an international membership of 1.7 million men.

At heart, though, Father McGivney was never anything more than an American parish priest, and nothing less than that, either -- beloved by children, trusted by young adults, and regarded as a "positive saint" by the elderly in his New Haven parish.

Moving and inspirational, Parish Priest re-creates the life of Father McGivney, a fiercely dynamic and yet tenderhearted man, and chronicles the process of canonization that may well make Father McGivney the first American-born parish priest to be declared a saint by the Vatican.

Julie M. Fenster is an award-winning author and historian, specializing in the American story. In 2006 her book Parish Priest, written with coauthor Douglas Brinkley, was a New York Times bestseller for seven weeks. She also wrote Ether Day: The Strange Tale of America's Greatest Medical Discovery and the Haunted Men Who Made It, which won the prestigious Anesthesia Foundation Award for Best Book. Fenster is the author of six other books, including Race of the Century: The Heroic True Story of the 1908 New York to Paris Auto Race and The Case of Abraham Lincoln: A Story of Adultery, Murder, and the Making of a Great President.