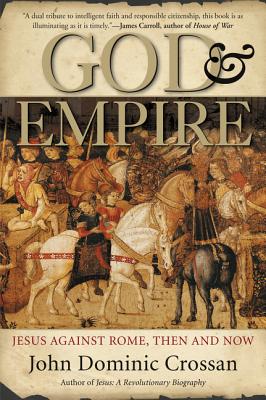 Jesus Against Rome, Then and Now

The bestselling author and prominent New Testament scholar draws parallels between 1st–century Roman Empire and 21st–century United States, showing how the radical messages of Jesus and Paul can lead us to peace today

Using the tools of expert biblical scholarship and a keen eye for current events, bestselling author John Dominic Crossan deftly presents the tensions exhibited in the Bible between political power and God’s justice. Through the revolutionary messages of Jesus and Paul, Crossan reveals what the Bible has to say about land and economy, violence and retribution, justice and peace, and ultimately, redemption. He examines the meaning of “kingdom of God” prophesized by Jesus, and the equality recommended to Paul by his churches, contrasting these messages of peace against the misinterpreted apocalyptic vision from the book of Revelations, that has been co-opted by modern right-wing theologians and televangelists to justify the United State’s military actions in the Middle East.


Praise For God and Empire: Jesus Against Rome, Then and Now…

“A dual tribute to intelligent faith and responsible citizenship, this book is as illuminating as it is timely.”
— James Carroll, author of House of War: The Pentagon and the Disastrous Rise of American Power

“This fine study of civilization, culture and transformation presents a complex subject in a clear and powerful way.”
— Publishers Weekly

“This book makes the best reading for the most readers of any that Crossan has written.”
— Booklist (starred review)