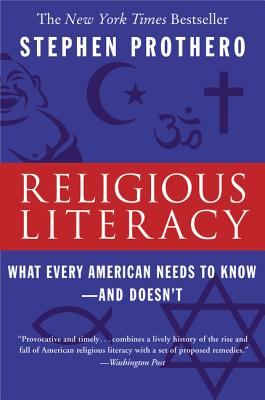 What Every American Needs to Know--And Doesn't

The United States is one of the most religious places on earth, but it is also a nation of shocking religious illiteracy.

Despite this lack of basic knowledge, politicians and pundits continue to root public policy arguments in religious rhetoric whose meanings are missed—or misinterpreted—by the vast majority of Americans.

"We have a major civic problem on our hands," says religion scholar Stephen Prothero. He makes the provocative case that to remedy this problem, we should return to teaching religion in the public schools. Alongside "reading, writing, and arithmetic," religion ought to become the "Fourth R" of American education.

Many believe that America's descent into religious illiteracy was the doing of activist judges and secularists hell-bent on banishing religion from the public square. Prothero reveals that this is a profound misunderstanding. "In one of the great ironies of American religious history," Prothero writes, "it was the nation's most fervent people of faith who steered us down the road to religious illiteracy. Just how that happened is one of the stories this book has to tell."

Prothero avoids the trap of religious relativism by addressing both the core tenets of the world's major religions and the real differences among them. Complete with a dictionary of the key beliefs, characters, and stories of Christianity, Islam, and other religions, Religious Literacy reveals what every American needs to know in order to confront the domestic and foreign challenges facing this country today.


Praise For Religious Literacy: What Every American Needs to Know--And Doesn't…

“This book is a must-read not only for educators, clergy and government officials, but for all adults.”
— Publishers Weekly (starred review)

“Smart but gentle, loving but blunt, Prothero is uniquely qualified to guide us through the fraught fields of faith.”
— Bruce Feiler, author of Walking the Bible and Where God Was Born

“Prothero makes you want to go back to college ... a scholar with the soul of a late-night television comic.”
— Newsweek

“Compelling and persuasively presented . . . a critical addition to the debate about teaching religion in public school.”
— San Francisco Chronicle

“Prothero’s book can be recommended for its readability. It is constantly interesting, very well-written, and chock full of essential information about all religions…This could be one of the most important books to be published this year. It deserves serious attention.”
— Journal of American Culture
or support indie stores by buying on
Copyright © 2020 American Booksellers Association