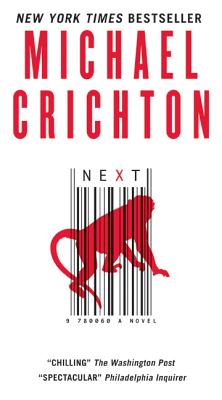 Michael Crichton, the #1 New York Times bestselling author of Jurassic Park, comes an astounding, eye-opening look at the world of genetics as it’s happening now, told as only Michael Crichton can tell it, with lightening fast pacing and thrilling chases.

Welcome to our genetic world. Fast, furious, and out of control. This is not the world of the future—it’s the world right now. Is a loved one missing some body parts? Are blondes becoming extinct? Is everyone at your dinner table of the same species? Humans and chimpanzees differ in only 400 genes; is that why an adult human being resembles a chimp fetus? And should that worry us? There’s a new genetic cure for drug addiction—is it worse than the disease?

We live in a time of momentous scientific leaps; a time when it’s possible to sell our eggs and sperm online for thousands of dollars; test our spouses for genetic maladies and even frame someone for a genetic crime. We live in a time when one fifth of all our genes are owned by someone else, and an unsuspecting person and his family can be pursued cross-country because they happen to have certain valuable genes within their chromosomes...

Devilishly clever, Next blends fact and fiction into a breathless tale of a new world where nothing is what it seems, and a set of new possibilities can open at every turn.

“NEXT is populated with blood-pressure-raising villains who will keep you turning the pages.”
— Forbes
or
Buy Here
Copyright © 2020 American Booksellers Association