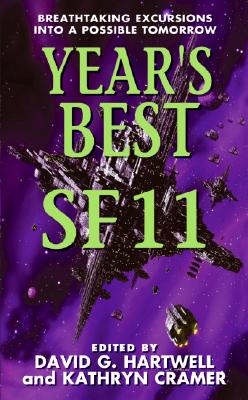 Travel farther than you've ever dreamed

Man has mused about the nature of our universe since he first gazed up in wonder at the stars. Now some of the most fertile imaginations in speculative fiction offer bold and breathtaking visions of "what's out there" and "what's next" in the eleventh annual celebration of the very best short SF to appear over the past year.

Once again, acclaimed editors and anthologists David G. Hartwell and Kathryn Cramer have compiled an extraordinary collection featuring stunning works from modern masters as well as dazzling gems from brilliant new talents -- tales that carry the reader to the far corners of the galaxy and beyond, into hitherto unexplored regions. Get ready to take glorious flight on a journey to the miraculous.