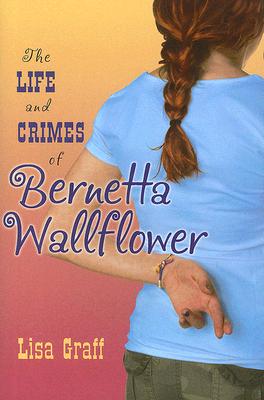 Bernetta Wallflower is having the worst summer on record. After her ex-best friend, Ashley, frames her for running a school-wide cheating ring, Bernetta can't convince anyone that she's innocent. Her parents ground her until her tonsils grow back, and she's not even allowed to go to her father's magic club, Trunk Number Eight, where she performs every Saturday as a magician's assistant. But what's most terrible of all is that Mount Olive, the private school Bernetta has attended since kindergarten, has decided to take away her scholarship for seventh grade. If Bernetta wants to return to school, she'll need to find $9,000 in three short months. It seems hopeless . . . until Bernetta comes up with a plan that involves a lot of lying, a little bit of trickery, and a mysterious stranger with chocolate-brown eyes.

This is a comic and touching story about losing your footing and finding your way again from the author of The Thing About Georgie.

Lisa Graff is the author of The Life and Crimes of Bernetta Wallflower and The Thing About Georgie, which was named to nine state reading lists. Lisa grew up in a small California town very much like the one in this novel and received an MFA in writing for children from the New School.