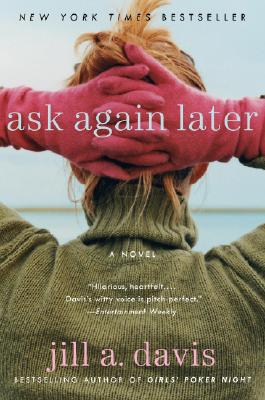 Emily has a tendency to live with one foot out the door. When her mother dramatically announces, "They've found a lump," Emily gladly leaves behind her career, her boyfriend, and those pesky, unans­werable questions about who she is and what she's doing with her life to be by her mother's side. But back in her childhood bedroom, Emily realizes that she hasn't run fast or far enough—especially when she opens the door, quite literally, to find her past staring her in the face.

“[The] dialogue...crackles with electricity between highly charged characters and is often as funny for what’s left unsaid…
— Los Angeles Times

“There are laughs, there are tears. Nice job.”
— Sacramento Bee

“A snappy and sardonic take on learning to love your (dysfunctional) family.”
— Lucinda Rosenfeld, author of WHAT SHE SAW... and WHY SHE WENT HOME

“...you’ll... veer between uncontrollable laughing fits and being stunned and misty-eyed by its poignant turns.”
— Jancee Dunn, author of But Enough About Me: A Jersey Girl's Unlikely Adventures Among the Absurdly Famous

“... smart-gal spin on the chick-lit formula… the writing and the characters lend the book an emotional heft.”
— Time Out New York

“This is one of the best books I have read so far this year.”
— BlogCritics Magazine

“Davis tackles real-life issues and infuses these rather somber moments with requisite levity and humor.”
— Bookreporter.com

Jill A. Davis was a writer for Late Show with David Letterman, where she received five Emmy nominations. She has also written several television pilots and movie screenplays in addition to short stories. She lives in New York City with her husband and daughter.

How does Emily’s job as receptionist at her father’s law firm enable her to better understand her father?

How do Joanie’s diagnosis of cancer and Marjorie’s giving birth to little Malcolm change their respective relationships with Emily, and to what extent are those relationships dysfunctional?

In what ways do Emily’s conversations with Wendy and Will at her father’s firm reveal the peculiar aspects of that office’s culture, and why is that culture especially comforting to Emily?

How does the structure of Ask Again Later, with its short segmented chapters and its frequent flashbacks, affect your appreciation of Emily’s response to her mother’s crisis?

To what extent does Emily’s decision to leave her boyfriend, Sam, stem from his criticism of and frustration with her inability to commit?

What does Emily hope to achieve by eavesdropping on her father’s telephone conversations, and why does she hold him accountable for all of her unsatisfactory relationships with men?

To what extent do Emily’s sessions with her therapist, Paul, demonstrate her aversion to making sense of her ‘internal life’? Why might she be unwilling to explore what is at the root of her unhappiness?

In what respects is Emily’s father, Jim, the catalyst for her renewed relationship with her ex-boyfriend, Sam?

How do Joanie’s surprising revelations about her children’s early years impact Emily’s feelings for her father?

How does Emily’s longing for a child relate to all that she has experienced as an adult child of divorced parents in the course of Ask Again Later?