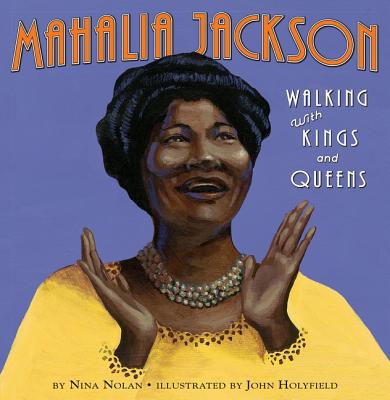 Walking with Kings and Queens

Accompanied by John Holyfield's gorgeous illustrations, debut author Nina Nolan's narrative wonderfully captures the amazing story of how Mahalia Jackson became the Queen of Gospel in this fascinating picture book biography. This nonfiction picture book is an excellent choice to share during homeschooling, in particular for children ages 4 to 6. It’s a fun way to learn to read and as a supplement for activity books for children.

Even as a young girl, Mahalia Jackson loved gospel music. Life was difficult for Mahalia growing up, but singing gospel always lifted her spirits and made her feel special. She soon realized that her powerful voice stirred everyone around her, and she wanted to share that with the world. Although she was met with hardships along the way, Mahalia never gave up on her dreams. Mahalia's extraordinary journey eventually took her to the historic March on Washington, where she sang to thousands and inspired them to find their own voices. With a timeline and further reading section, this book is perfect for Common Core.

Nina Nolan has been writing for as long as she can remember (she sent out her first story to publishers when she was ten years old). When Nina read Just Mahalia, Baby by Laurraine Goreau, she was fascinated by the amazing and graceful life of Mahalia Jackson. She wanted more people, especially young ones, to know about Mahalia so they could feel empowered by her strength, too. Nina lives in Portland, Oregon, with her ridiculously darling puppy dog, Marshall.

John Holyfield's first picture book was The Hard-Times Jar by Ethel Footman Smothers, for which he received a Flying Start in Publishers Weekly. A renowned fine artist, his paintings and prints can be found in galleries nationwide. John began painting at the age of nine, and his work is rich in cultural themes that capture the essence of the African American experience. John lives and paints in Rosemont, West Virginia.