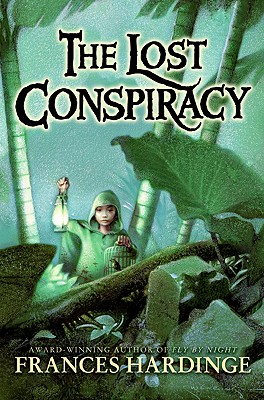 On an island of sandy beaches, dense jungles, and slumbering volcanoes, colonists seek to apply archaic laws to a new land, bounty hunters stalk the living for the ashes of their funerary pyres, and a smiling tribe is despised by all as traitorous murderers. It is here, in the midst of ancient tensions and new calamity, that two sisters are caught in a deadly web of deceits.

Arilou is proclaimed a beautiful prophetess—one of the island's precious oracles: a Lost. Hathin, her junior, is her nearly invisible attendant. But neither Arilou nor Hathin is exactly what she seems, and they live a lie that is carefully constructed and jealously guarded.

When the sisters are unknowingly drawn into a sinister, island-wide conspiracy, quiet, unobtrusive Hathin must journey beyond all she has ever known of her world—and of herself—in a desperate attempt to save them both. As the stakes mount and falsehoods unravel, she discovers that the only thing more dangerous than the secret she hides is the truth she must uncover.


Praise For The Lost Conspiracy…

“A luminous example of gifted storytelling at its best.”
-Publishers Weekly (starred review)

“A deeply imaginative story, with nuanced characters, intricate plotting, and an amazingly original setting.”-
-ALA Booklist

“Kids will find that this is a world like nothing they’ve ever encountered before and that they’ll never want to leave. It’s Hardinge’s magnum opus.”—Betsy Bird, NYPL librarian/SLJ blogger (Fuse Number 8)“Relentlessly inventive. This novel is just plain fun.”-
-School Library Journal