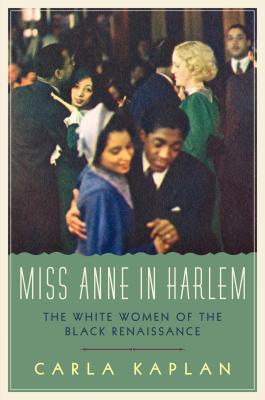 The White Women of the Black Renaissance

The 1920s in New York City was a time of freedom, experimentation, and passion—with Harlem at the epicenter. White men could go uptown to see jazz and modern dance, but women who embraced black culture too enthusiastically could be ostracized.

Miss Anne in Harlem focuses on six of the unconventional, free-thinking women, some from Manhattan high society, many Jewish, who crossed race lines and defied social conventions to become a part of the culture and heartbeat of Harlem.

Praise For Miss Anne in Harlem: The White Women of the Black Renaissance…

“In this remarkable work of historical recovery . . . [Kaplan] resurrects Miss Anne as a cultural figure and explores the messy contradictions of her life . . . deeply researched.”
— New York Times Book Review

“Endlessly fascinating, Miss Anne in Harlem reveals a whole new perspective on the Harlem Renaissance, and Carla Kaplan delivers an essential and absorbing portrait of race and sex in 20th century America.”
— Gilbert King, author of Devil in the Grove

“With superb, exhaustive research and finely dramatic writing, Carla Kaplan’s brilliant Miss Anne in Harlem fills an aching void in our knowledge of the Harlem Renaissance. It also significantly deepens our understanding of American culture in the 1920s and American feminism in general.”
— Arnold Rampersad, author of The Life of Langston Hughes

“[An] utterly fascinating and deeply insightful account. . . . This fine book takes the Misses Anne seriously and goes further, to reveal the workings of interracial networks in one of the most important cultural phenomena in American history.”
— Nell Irvin Painter, author of The History of White People

“The fact that white women played a pivotal role in creating the Harlem Renaissance was a secret hiding in plain sight, but it took Carla Kaplan’s keen eye, rigorous research, and crystal clear prose to reveal it. A surprising, delightful book.”
— Debby Applegate, author of The Most Famous Man in America

“Carla Kaplan has taken on a dauntingly liminal topic and by force of scholarly rigor and narrative compassion rendered it central to our understanding of an era. Lush, original, and vigorously argued....”
— Diane McWhorter, author of Carry Me Home

“Kaplan always writes from inside her characters, and with a novelist’s sense of scope—and compassion.”
— Hilton Als, New Yorker.com

“Kaplan’s meticulously documented and intrepid history of Miss Anne encompasses a unique vantage on the complexities of race and gender and a dramatic study in paradox.”
— Booklist (starred review)

“(Kaplan’s) extensive research has given life to a critical period in black American history-and given credit to the white women who, for various reasons, helped the Harlem Renaissance flourish.”
— NPR.org

“[A] revelatory book. . . . Aside from its significance as cultural history, Miss Anne in Harlem is packed with amazing life stories.”
— NPR's Fresh Air

“In her clear-sighted, empathetic assessment of a half-dozen of these women, Carla Kaplan casts a fresh eye over people and relationships too often reduced to stereotypes.”
— Daily Beast

“Carla Kaplan has given us and history a great gift.”
— New York Journal of Books

Carla Kaplan is an award-winning professor and writer who holds the Stanton W. and Elisabeth K. Davis Distinguished Professorship in American Literature at Northeastern University. She is the author of The Erotics of Talk and Zora Neale Hurston: A Life in Letters. A recipient of a Guggenheim fellowship, Kaplan has been a fellow in residence at the Cullman Center for Scholars and Writers, the Schomburg Center for Research in Black Culture, and the W. E. B. DuBois Institute and is a fellow of the Society of American Historians.