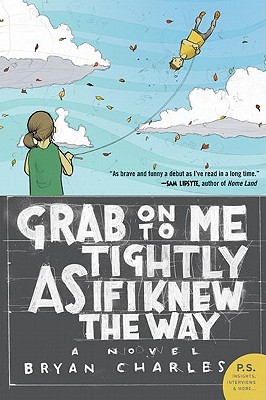 Grab On to Me Tightly as if I Knew the Way

It’s 1992, and America is caught in the grip of major Angst. In Washington, D.C., George H. W. Bush is rattling the mother of all sabres at Saddam Hussein. In Seattle, Curt Kobain is heady with the smell of teen spirit. And in Kalamazoo, MI, Vim Sweeney is trying to put off adulthood and all that comes with it (whatever that is) as long as he can. He’s already juggling guitars, girls, and graduation—and a biological father who Wants To Be Involved. And he still can’t convince his friends why local schoolboy hero Derek Jeter is bound for obscurity. How can he possibly handle the future when he can’t even cope with right now?

Grab Onto Me Tightly As If I Knew the Way traces Vim’s stumble toward adulthood as he comes to terms with his parents, balances friendships and infatuation with varying levels of success, and accepts that the things he thought would last forever probably won’t. Big-hearted and laugh-out-loud funny, it introduces an exciting and imaginative new writer who deftly captures the follies, foibles, and fun of adolescence for readers of every age.


Praise For Grab On to Me Tightly as if I Knew the Way: A Novel…

“Poetic...will invite comparisons to Nick Hornby, but let it be said that Charles does it his way.” — Booklist (starred review)

“As brave and funny a debut as I’ve read in a long time.” — Sam Lipsyte, author of Home Land

“Shoots into you like a bolt of electricity, sparking all kinds of excited feelings about art and life and writing.” — Thomas Beller, author of The Sleep-Over Artist and How to be a Man

“Charles will get inside your brain and make sense of it for you once and for all.” — Elizabeth Crane, author of When the Messenger is Hot and All This Heavenly Glory

Bryan Charles is the author of the memoir There's a Road to Everywhere Except Where You Came From, and Wowee Zowee, a book about Pavement written for the 33 1/3 series.