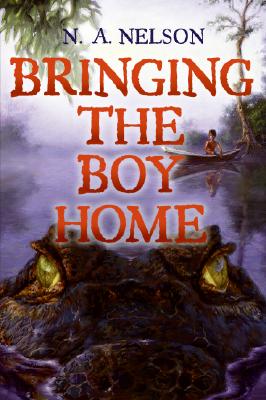 "I've seen what the world does to the weak. It'll eat you alive."

Tirio was cast out of the Takunami tribe at a very young age because of his disabled foot. But an American woman named Sara adopted him, and his life has only gotten better since. Now, as his thirteenth birthday approaches, things are nearly perfect. So why is he having visions and hearing voices calling him back to the Amazon?

Luka has spent his whole life preparing for his soche seche tente, a sixth-sense test all Takunami boys must endure just before their thirteenth birthday. His family's future depends on whether or not he passes this perilous test. His mother has dedicated herself to making sure that no aspect of his training is overlooked . . . but fate has a way of disturbing even the most carefully laid plans.

N. A. Nelson was born in London, England, and grew up on a cattle farm in rural Missouri. Living on a thousand acres of wilderness provided plenty of opportunities for adventure, but it also created a sense of wonderment about what else was out there. After graduating with a degree in tourism, the author strapped on a backpack and has been exploring the world ever since. Recent journeys include the jungles of the Amazon and the glaciered peak of Mount Kilimanjaro. Bringing the Boy Home is the author's debut novel and the winner of the 2005 Ursula Nordstrom Fiction Contest.

The author will donate a portion of the profits of this book to the Amazon Conservation Team (ACT), whose mission is to work in partnership with indigenous people in conserving biodiversity, health, and culture in tropical America. To learn more, visit www.amazonteam.org.


Praise For Bringing the Boy Home…

“…[a] richly hued novel about the winding turns of destiny and the bonds between father and son, tribe and family.”
— Kirkus Reviews
or
Not Currently Available for Direct Purchase
Copyright © 2020 American Booksellers Association