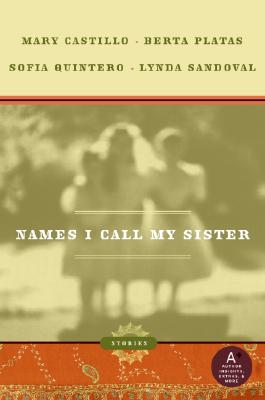 Names I Call My Sister

Four stories of sisterhood—the bonds, the wars, the frustrations, the love—seasoned with hot Latin spice!

Those "Wild Orihuela Girls," Dori and her sister Sela, intend to live up to their reputation—and more!—in order to give their snooty sister-in-law-to-be exactly what she deserves on her wedding day . . . Till Death Do Us Part by Mary Castillo

Anita Suarez is only seeking comfort after losing her dream job and carefree lifestyle, but finds that her old-fashioned sister Susana has abandoned her family to run off to Sin City with a college hunk. Now it's up to Anita to bring Susu back to reality and keep the younger man's sexy big brother at bay . . . What Stays in Vegas by Berta Platas

Michelle Saez is a total straight-arrow by day—but at night, she lives a shocking double life in leather as Madame Michelina. And her scandalous secret could very well derail her attorney sister Jennifer's bid for elected office . . . Whipped by Sofia Quintero

Mary Castillo attenteded the University of Southern California, where she majored in History. During that time she went on medical missions to Mexico (where she helped deliver a baby), and interned at L.A. County Hospital. But when it was time to choose a career, Mary went back to her original love of storytelling and began writing screenplays and novels. She has worked in public relations, advertising, and as a reporter for the L.A. Times Community News. She lives in Orange County, California, with her family.

Born in Havana, Cuba, Berta Platas has four kids, three-fourths of them are boys. She has lived in Miami, Pittsburgh, New York, Charlotte, and Atlanta, in that order, and is currently living just north of Atlanta, Georgia. Despite her success, she still works at a fun day job in marketing.

Sofia Quintero is also the author of Divas Don’t Yield and the co-founder of Chica Luna Productions in New York City. She also writes hip-hop fiction under the name pen name Black Artemis.

Lynda Sandoval is a former police officer and the author of twenty award-winning books. She writes young adult novels as well as women's fiction, romance, and nonfiction for five different publishers, all while working part-time as a 9-1-1 fire/medical dispatcher. Her work has appeared on the Waldenbooks Romance Bestsellers' list and has won numerous national awards, including a Colorado Book Award nomination for Best Young Adult Literature and a National Reader's Choice Award, also in the YA category. Lynda's teen novels have twice been nominated as ALA Quick Picks for Young Adult Readers, and her 2004 release, Who's Your Daddy? was named to the New York Public Library's "Books for the Teen Age" list. Unsettling, Lynda's 2004 release, won the 2005 Laurie Best of the Best Published Award, as well as several other honors. Lynda has been profiled in People en Espanol, Writer's Digest, Romantic Times, Catalina, Latina, The Denver Post, and many other publications.