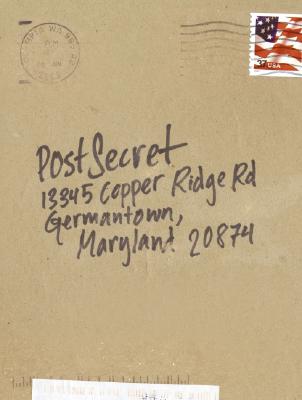 “A fascinating public airing of private thoughts—some dark, others funny, endearing or disturbing—written on homemade postcards. . . . The range of efforts (meticulous, sloppy, artful, ponderous) will astound you.” —TIME.com

Frank Warren is the founder and curator of the PostSecret project. For the project, which was started in October 2004, Warren asked people to write a secret they had never told anyone on a handmade postcard and mail it to him. He then displayed selected cards—the authors are anonymous—on his website, www.postsecret.com. The response was overwhelming, and the cards are astonishing in their honesty and creativity. Each card bears an intimate, powerful, or even chilling sentiment, told through handmade illustrations, photographs, collages, and other creative means. Among the thousands of amazing cards Warren received are the following messages:

• “Sometimes when I’m having sex with my wife I’m thinking of my mom...”

• “I waste office supplies because I hate my boss.”

• “I am a Southern Baptist pastor’s wife. No one knows that I do not believe in God.”

For the book Warren has personally selected about 300 postcards that powerfully reflect the unique essence of this remarkable project.

“Humanity at its finest . . . And because of it I am falling in love with the world again.”
— – A contributor on Postsecret.com

“A fascinating public airing of private thoughts. . . The range of efforts (meticulous, sloppy, artful, ponderous) will astound you.”
— – TIME.com, "50 Coolest Websites of 2005"

Frank Warren started PostSecret as a community art project where he invited total strangers to anonymously mail in their secrets on a homemade postcard. This simple act sparked a global phenomenon. Frank has received over 1 million secrets in his mailbox with more arriving every day but Sunday. PostSecret.com has won seven Webby Awards and is the most visited advertisement-free blog in the world. The postcards have been curated for five New York Times bestselling books and have been exhibited at the Museum of Modern Art and the American Visionary Art Museum. Frank has traveled the world sharing secrets and stories from Australia to the White house. There is a PostSecret album, a PostSecret TED Talk and a PostSecret Play on tour. In 2011 Frank was awarded the ‘HopeLine Lifetime Achievement Award’ for his work on suicide prevention and was invited to the White House to work on issues of mental wellness. Frank lives in Germantown, Maryland, with his wife and daughter.