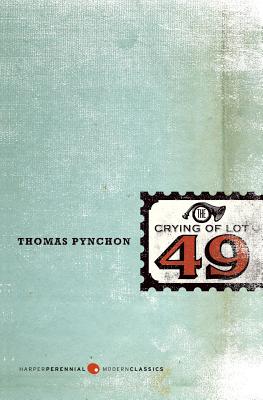 The Crying of Lot 49

The Crying of Lot 49 is Thomas Pynchon's highly original classic satire of modern America, about Oedipa Maas, a woman who finds herself enmeshed in what would appear to be an international conspiracy.

When her ex-lover, wealthy real-estate tycoon Pierce Inverarity, dies and designates her the coexecutor of his estate, California housewife Oedipa Maas is thrust into a paranoid mystery of metaphors, symbols, and the United States Postal Service. Traveling across Southern California, she meets some extremely interesting characters, and attains a not inconsiderable amount of self-knowledge.

“A puzzle, an intrigue, a literary and historical tour de force with a strongly European flavor.” — San Francisco Examiner

"The work of a virtuoso with prose. . . . His intricate symbolic order is akin to that of Joyce's Ulysses." — Chicago Tribune

Thomas Pynchon was born in 1937. His books include V, Gravity's Rainbow, Vineland, Mason & Dixon, Against the Day, Inherent Vice, and Bleeding Edge.