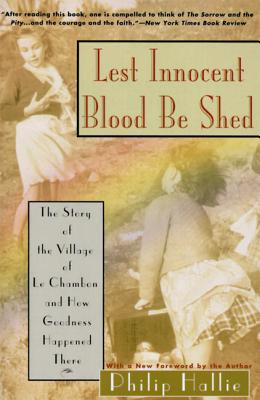 Lest Innocent Blood Be Shed

During the most terrible years of World War II, when inhumanity and political insanity held most of the world in their grip and the Nazi domination of Europe seemed irrevocable and unchallenged, a miraculous event took place in a small Protestant town in southern France called Le Chambon. There, quietly, peacefully, and in full view of the Vichy government and a nearby division of the Nazi SS, Le Chambon's villagers and their clergy organized to save thousands of Jewish children and adults from certain death.

Philip Hallie was Griffin Professor of Philosophy at Wesleyan University, where he taught for thirty-two years. He died in 1994, leaving this manuscript. That it can now be published is do to the devotion of his wife, Doris Ann Hallie, who contributed an afterword. The foreword by John Compton, fellow philosopher and longtime friend of the author, will help the reader to understand this unusual document in the context of Hallie's life and thought.