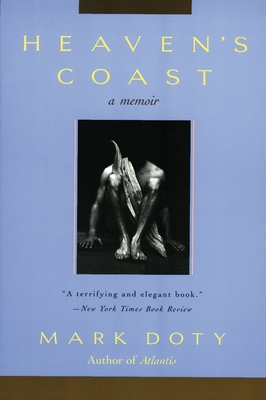 The year is 1989 and Mark Doty's life has reached a state of enviable equilibrium. His reputation as a poet of formidable talent is growing, he enjoys his work as a college professor and, perhaps most importantly, he is deeply in love with his partner of many years, Wally Roberts. The harmonious existence these two men share is shattered, however, when they learn that Wally has tested positive for the HIV virus.

From diagnosis to the initial signs of deterioration to the heartbreaking hour when Wally is released from his body's ruined vessel, Heaven's Coastis an intimate chronicle of love, its hardships, and its innumerable gifts. We witness Doty's passage through the deepest phase of grief -- letting his lover go while keeping him firmly alive in memory and heart -- and, eventually beyond, to the slow reawakening of the possibilities of pleasure. Part memoir, part journal, part elegy for a life of rare communication and beauty, Heaven's Coast evinces the same stunning honesty, resplendent descriptive power and rapt attention to the physical landscape that has won Doty's poetry such attention and acclaim.

Mark Doty's books of poetry and nonfiction prose have been honored with numerous distinctions, including the National Book Critics Circle Award, the PEN/Martha Albrand Award, the Los Angeles Times Book Prize, and, in the United Kingdom, the T. S. Eliot Prize. In 2008, he won the National Book Award for Fire to Fire: New and Selected Poems. He is a professor at the University of Houston, and he lives in New York City.