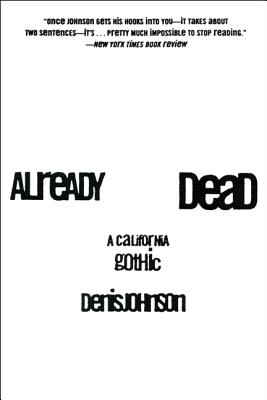 A contemporary noir, Already Dead is the tangled story of Nelson Fairchild Jr., disenfranchised scion to a northern California land fortune. A relentless failure, Nelson has botched nearly every scheme he's attempted to pull off. Now his future lies in a potentially profitable marijuana patch hidden in the lush old-growth redwoods on the family land.

Nelson has some serious problems. His marriage has fallen apart, and he may lose his land, cash and crop in the divorce. What's more, in need of some quick cash, he had foolishly agreed to smuggle $90,000 worth of cocaine through customs for Harry Lally, a major player in a drug syndicate. Chickening out just before bringing the drugs through, he flushed the powder. Now Lally wants him dead, and two goons are hot on his trail. Desperate, terrified and alone, for Nelson, there may be only one way out.

This is Denis Johnson's biggest and most complex book to date, and it perfectly showcases his signature themes of fate, redemption and the unraveling of the fabric of today's society. Already Dead, with its masterful narrative of overlapping and entwined stories, will further fuel the acclaim that surrounds one of today's most fascinating writers.

Denis Johnson is the author of The Name of the World, Already Dead, Jesus' Son, Resuscitation of a Hanged Man, Fiskadoro, The Stars at Noon, and Angels. His poetry has been collected in the volume The Throne of the Third Heaven of the Nations Millennium General Assembly. He is the recipient of a Lannan Fellowship and a Whiting Writer's Award, among many other honors for his work. He lives in northern Idaho.
Loading...
or support indie stores by buying on
(This book is on backorder)