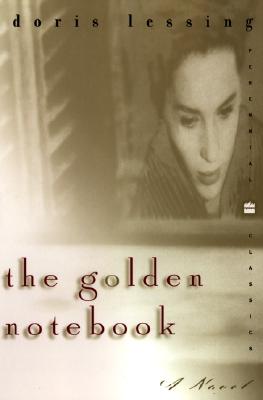 "The Golden Notebook is Doris Lessing's most important work and has left its mark upon the ideas and feelings of a whole generation of women." — New York Times Book Review

Anna is a writer, author of one very successful novel, who now keeps four notebooks. In one, with a black cover, she reviews the African experience of her earlier years. In a red one she records her political life, her disillusionment with communism. In a yellow one she writes a novel in which the heroine relives part of her own experience. And in a blue one she keeps a personal diary. Finally, in love with an American writer and threatened with insanity, Anna resolves to bring the threads of all four books together in a golden notebook.

Lessing's best-known and most influential novel, The Golden Notebook retains its extraordinary power and relevance decades after its initial publication.

“Lessing writes about her own sex with the unrelenting intensity of Simone de Beauvoir, and about sex itself with the frankness and detail of John O.” — Washington Post

“A work of high seriousness . . . The most absorbing and exciting piece of new fiction I have read in a decade; it moves with the beat of our time, and it is true.” — Irving Howe, The New Republican

“No ordinary work of fiction...the technique, in a word, is brilliant, and places Doris Lessing in the forefront of British novelists.” — Saturday Review

“This exciting writer has tried much, aimed high, and has paraded a galaxy of gifts.” — Baltimore Sun

"The most absorbing and exciting piece of new fiction I have read in a decades; it moves with the beat of our time, and it is true." — Irving Howe, New Republic