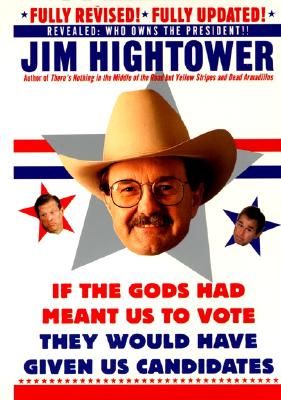 Jim Hightower, America's favorite subversive, is still mad as hell, and he's not going to take it anymore. But he will give you a sizeable piece of his mind on Election 2000. This plain-talking, name-naming, podium-pounding populist zeros in on everything that ails us, from the global economy and media to big business and election winners everywhere. In his hard hitting commentary and hilarious anecdotes, Hightower spares no one, including the scared cows -- and especially the politicians -- who helped steer us into this mess in the first place. An equal opportunity muckrucker and a conscientious agitator for "We the People", Hightower inspires us to take charge again, build a new politics for a better tommorow -- and have a lot of laughs along the way

Jim Hightower is a political spark plug who has spent 25 years battling Washington and Wall Street on behalf of working families, consumers, environmentalists, small businesses and just plain folk. He confesses that he has been a practicing politician, serving two terms as Texas' elected agriculture commisioner. In addition to his popular radio broadcasts, his speechifying and all-around agitating, he publishes the biweekly political newsletter The Hightower Lowdown. His previous bestseller was There's Nothing in the Middle of the Road but Yellow Stripes and Dead Armadillos.
Loading...
or
Not Currently Available for Direct Purchase