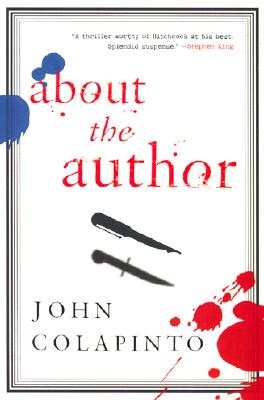 From the author of the New York Times bestseller As Nature Made Him comes a &#8220clever and entertaining first novel.”—Elle

Despite a severe case of writer's block, Cal Cunningham dreams of writing a novel that will permit him to escape from his life as a penniless stockboy in dirty and dangerous upper Manhattan bookstore. However, when his roommate is suddenly killed in a bicycle accident, Cal is suddenly the author of a page-turning autobiography. Propelled to the top of the bestseller lists with million-dollar movie deals, Cal finds that he has realized his most outlandish fantasies of literary success. That is, until he discovers that someone knows his secret.

A searingly funny psychological thriller, About the Author delves into the excesses of the publishing world and shows that sometimes the difference between reality and imagination can be fatal.

John Colapinto has written for Vanity Fair, The New Yorker, Esquire, Mademoiselle, Us Weekly, and Rolling Stone, where the landmark National Magazine Award-winning article that was the basis for As Nature Made Him first appeared. He is also the author of the novel About the Author. He lives in New York City with his wife and son.