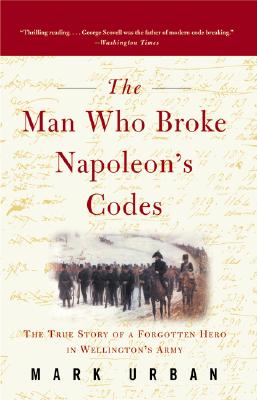 The Man Who Broke Napoleon's Codes

Spanning the battle of Corunna in 1809 to the 1815 victory at Waterloo, this is the dramatic true-life tale of an unsung hero in Wellington's army.

Common-born George Scovell -- an engraver's apprentice -- joins the British Army during the Napoleonic Wars and becomes a commissioned officer. As Bonaparte's juggernaut marches across Europe, Scovell soon proves himself a linguistic genius and begins to crack the basic codes used in French dispatches, giving General Wellington advance knowledge of French plans. But as the enemy changes from simple ciphers to baffling "next to impossible" encoded messages, Scovell finds himself racing against time to break the legendary "Great Paris Cipher" and save the British Army.

The thrill of clashing armies, challenging puzzles, and the personal struggle of a long-forgotten hero make The Man Who Broke Napoleon's Codes a gripping -- and brain-teasing -- adventure.

As a journalist and former army officer, Mark Urban has the perspective of an eyewitness to the most crucial political events and military campaigns of our time. He lives in London and is a prominent BBC Newsnight correspondent.