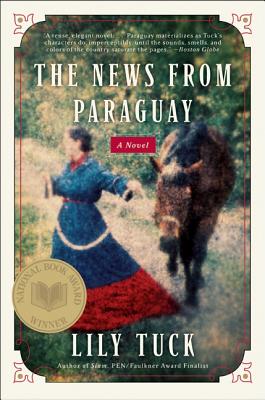 The News from Paraguay

The year is l854. In Paris, Francisco Solano -- the future dictator of Paraguay -- begins his courtship of the young, beautiful Irish courtesan Ella Lynch with a poncho, a Paraguayan band, and ahorse named Mathilde. Ella follows Franco to Asunción and reigns there as his mistress. Isolated and estranged in this new world, she embraces her lover's ill-fated imperial dream -- one fueled by a heedless arrogance that will devastate all of Paraguay.
With the urgency of the narrative, rich and intimate detail, and a wealth of skillfully layered characters, The News from Paraguay recalls the epic novels of Gabriel García Márquez and Mario Vargas Llosa.


Praise For The News from Paraguay: A Novel…

“Compelling…the stuff that good fiction is made of: complex characters and an intricate narrative.”
— Newsday

“The perfect setting for Tuck’s dark wit.”
— The New Yorker

“The episodic style achieves many lovely moments…images are so vivid you can almost smell them.”
— Washington Post Book World

“THE NEWS FROM PARAGUAY captures the physical beauty of an exotic land in Tuck’s characteristically exact, evocative prose.”
— Publishers Weekly

“Elegant …the author’s research is impressive … a rich and rewarding read.”
— Publishers Weekly

Born in Paris, LILY TUCK is the author of four previous novels: Interviewing Matisse, or the Woman Who Died Standing Up; The Woman Who Walked on Water; Siam, or the Woman Who Shot a Man, which was nominated for the 2000 PEN/Faulkner Award for Fiction; and The News from Paraguay, winner of theNational Book Award. She is also the author of the biography Woman of Rome: A Life of Elsa Morante. Her short stories have appeared in The New Yorker and are collected in Limbo and Other Places I Have Lived. Lily Tuck divides her time between Maine and New York City.