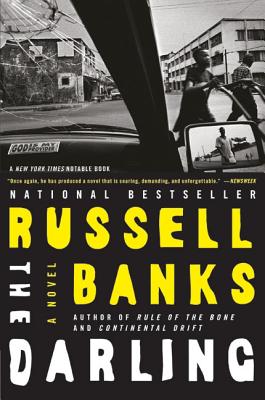 Set in Liberia and the United States from 1975 through 1991, The Darling is the story of Hannah Musgrave, a political radical and member of the Weather Underground.

Hannah flees America for West Africa, where she and her Liberian husband become friends of the notorious warlord and ex-president, Charles Taylor. Hannah's encounter with Taylor ultimately triggers a series of events whose momentum catches Hannah's family in its grip and forces her to make a heartrending choice.


Praise For The Darling: A Novel…

“Banks’s novel is a vivid account of a time of terror, exposing the secrets of the soul.”
— O magazine

“Banks creates a heroine every bit as complex and flawed as someone out of Jane Austen.”
— Hartford Courant

“Banks has created a heroine every bit as complex and flawed as something out of Jane Austen.”
— St. Petersburg Times

“In The Darling, he is working at full strength, and his readers are in his debt.”
— Washington Post Book World

“Once again, he has produced a novel that is searing, demanding and unforgettable.”
— Newsweek

“Banks has written a novel that is utterly accessible, forcefully wrought and undeniably passionate.”
— Lisa Ko, author of The Leavers

“Banks’ mastery of his material makes this a compelling and important book.”
— Orlando Sentinel