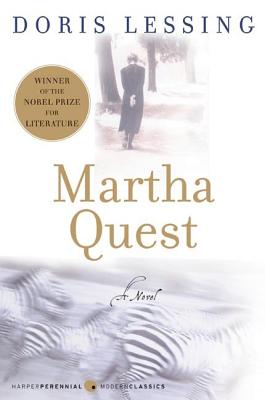 Intelligent, sensitive, and fiercely passionate, Martha Quest is a young woman living on a farm in Africa, feeling her way through the torments of adolescence and early womanhood. She is a romantic idealistic in revolt against the puritan snobbery of her parents, trying to live to the full with every nerve, emotion, and instinct laid bare to experience. For her, this is a time of solitary reading daydreams, dancing -- and the first disturbing encounters with sex. The first of Doris Lessing's timeless Children of Violence novels, Martha Quest is an endearing masterpiece.

"Stubborn, resilient, wry towards herself, Martha is Doris Lessing's most satisfying and complex characterization. She is a child of her times, of violence, who 'could no more dissociate herself from the violence done by her than a tadpole can live out of water."
— Times (London)

"There are many notable descriptions of adolescent boys and young men in our fiction. There are very few, in the same deep and radical sense, of young women. Mrs. Lessing's study of Martha Quest is one of them."
— New York Times Book Review

Compare the scenes that take place in nature, on the farm and veldt, with those set in town. How does Lessing’s writing-its language, its focus, its rhythms-change from one setting to the next? What does this reveal about Martha-and about Lessing herself?

Looking at a gathering of people on the steps of the Socrates’ veranda, Martha remembers “with shame the brash and easy way she had said to Joss that she repudiated race prejudice; for the fact was, she could not remember a time when she had not thought of people in terms of groups, nations, or color of skin first, and as people afterwards.” (p. 67) Does this way of thinking make Martha a racist?

Compare Martha’s relationships with the men she meets in town with those she knows from the farm. How and why is Martha different with both sets of men?

What do you think of her reactions to sex, and of the way she felt and acted after she and Adolph first made love?

What kind of marriage do Mr. and Mrs. Quest have, and what kind of model does it give Martha for her own future relationships?

When Martha declares that she will not be like the wives of the Left Book Club do you believe her? What does the Club reveal about men and women’s roles, even in a “liberal” society?

How do Martha’s experiences compare with your own adolescence and young adulthood. Has Lessing accurately captured teenaged life?

Is Martha’s story political or personal? How is she a product of her place and time, and of its social and sexual mores?

Martha Quest was written nearly half a century ago. How do you think the novel has aged?