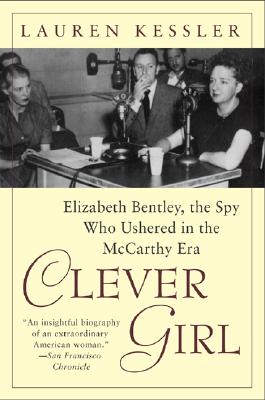 Elizabeth Bentley, the Spy Who Ushered in the McCarthy Era

Communists vilified her as a raging neurotic. Leftists dismissed her as a confused idealist. Her family pitied her as an exploited lover. Some said she was a traitor, a stooge, a mercenary and a grandstander. To others she was a true American heroine—fearless, principled, bold and resolute. Congressional committees loved her. The FBI hailed her as an avenging angel. The Catholics embraced her. But the fact is, more than half a century after she captured the headlines as the "Red Spy Queen," Elizabeth Bentley remains a mystery.

New England-born, conservatively raised, and Vassar-educated, Bentley was groomed for a quiet life, a small life, which she explored briefly in the 1920s as a teacher, instructing well-heeled young women on the beauty of Romance languages at an east coast boarding school. But in her mid-twenties, she rejected both past and future and set herself on an entirely new course. In the 1930s she embraced communism and fell in love with an undercover KGB agent who initiated her into the world of espionage. By the time America plunged into WWII, Elizabeth Bentley was directing the operations of the two largest spy rings in America. Eventually, she had eighty people in her secret apparatus, half of them employees of the federal government. Her sources were everywhere: in the departments of Treasury and Commerce, in New Deal agencies, in the top-secret OSS (the precursor to the CIA), on Congressional committees, even in the Oval Office.

When she defected in 1945 and told her story—first to the FBI and then at a series of public hearings and trials—she was catapulted to tabloid fame as the "Red Spy Queen," ushering in, almost single-handedly, the McCarthy Era. She was the government’s star witness, the FBI’s most important informer, and the darling of the Catholic anti-Communist movement. Her disclosures and accusations put a halt to Russian spying for years and helped to set the tone of American postwar political life.

But who was she? A smart, independent woman who made her choices freely, right and wrong, and had the strength of character to see them through? Or was she used and manipulated by others? Clever Girl is the definitive biography of a conflicted American woman and her controversial legacy. Set against the backdrop of the political drama that defined mid-twentieth century America, it explores the spy case whose explosive domestic and foreign policy repercussions have been debated for decades but not fully revealed—until now.


Praise For Clever Girl: Elizabeth Bentley, the Spy Who Ushered in the McCarthy Era…

“A spellbinding tale of a woman who fell prey to her idealism.”
— Library Journal

“A brilliant portrait of [a] complicated personality.”
— Eugene Weekly

“Superb... [brings] to life the loneliness, the fear and the thrill of [Bentley’s] life as spy and anti-spy.”
— Seattle Times

“An insightful biography of an extraordinary American woman [and] a thrilling character-driven drama… Reads like good fiction…fascinating.”
— San Francisco Chronicle

“Clever Girl lucidly and engagingly lays out the tragic arc of an unlikely and important life.”
— The Onion

“Kessler has written a book as compelling and fascinating as any novel. Clever Girl is the work of a master.”
— Statesman Journal (Oregon)

Lauren Kessler is the author of ten books, among them the Los Angeles Times bestseller The Happy Bottom Riding Club: The Life and Times of Pancho Barnes and Stubborn Twig: Three Generations in the Life of a Japanese American Family. Kessler directs the graduate program in literary nonfiction at the University of Oregon. She lives in Eugene, Oregon.