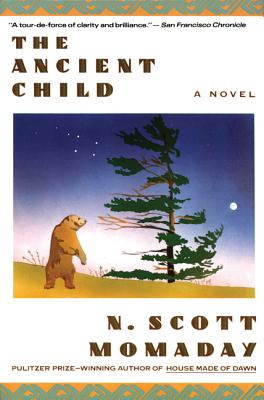 "An intriguing combination of myth, fiction, and storytelling that demonstrates the continuing power and range of Momaday's creative vision....These are magical words. Listen." -- Washington Post

In his first novel since the Pulitzer Prize-winning House Made of Dawn, N. Scott Momaday shapes the ancient Kiowa myth of a boy who turned into a bear into a timeless American classic. The Ancient Child juxtaposes Indian lore and Wild West legend into a hypnotic, often lyrical contemporary novel--the story of Locke Setman, known as Set, a Native American raised far from the reservation by his adoptive father. Set feels a strange aching in his soul and, returning to tribal lands for the funeral of his grandmother, is drawn irresistibly to the fabled bear-boy. When he meets Grey, a beautiful young medicine woman with a visionary gift, his world is turned upside down. Here is a magical saga of one man's tormented search for his identity--a quintessential American novel, and a great one.

N. Scott Momaday was born in 1934 in Lawton, Oklahoma. A novelist, poet, playwright, teacher, painter, and storyteller, his accomplishments in literature, scholarship, and the arts have established him as an enduring American master. He is the recipient of numerous awards and honors that include the Pulitzer Prize, a National Medal of Arts, the Anisfield-Wolf Book Award for Lifetime Achievement, and the Ken Burns American Heritage Prize. He lives in New Mexico.


Praise For The Ancient Child…

“An intriguing combination of myth, fiction, and storytelling that demonstrates the continuing power and range of Momaday’s creative vision . . . As Momaday’s vision unfolds, the reader recognizes storytelling that is continuous and timeless . . .These are magical words. Listen.”
— Washington Post

“A tour-de-force of clarity and brilliance.”
— San Francisco Chronicle

“Some of the finest writing about the plains I’ve ever read...The Ancient Child comes as close to a book-length prose poem as any novel you’ll see this year. Put aside your normal expectations and let it have its way with you, and you’ll be in for a real treat.”
— Alan Cheuse, "All Things Considered" on NPR
or
Not Currently Available for Direct Purchase
Copyright © 2020 American Booksellers Association