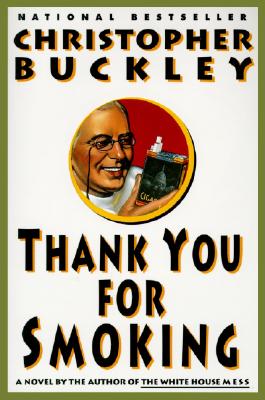 Thank You for Smoking

Nick Naylor likes his job. In the neo-puritanical nineties, it's a challenge to defend the rights of smokers and a privilege to promote their liberty. Sure, it hurts a little when you're compared to Nazi war criminals, but Nick says he's just doing what it takes to pay the mortgage and put his son through Washington's elite private school St. Euthanasius. He can handle the pressure from the antismoking zealots, but he is less certain about his new boss, BR, who questions whether Nick is worth $150,000 a year to fight a losing war. Under pressure to produce results, Nick goes on a PR offensive. But his heightened notoriety makes him a target for someone who wants to prove just how hazardous smoking can be. If Nick isn't careful, he's going to be stubbed out.

Christopher Buckley, whose novel themovie is based on, is the editor of ForbesFYI magazine and the author of elevenbooks, many of them national bestsellers,including Thank You for Smoking. He isthe winner of the distinguished ThurberPrize for American humor.