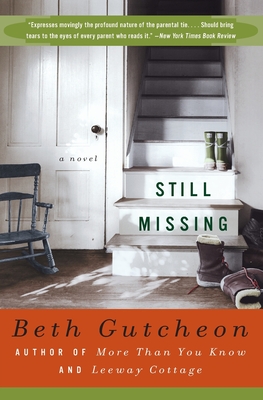 Alex Selky, going on seven, kissed his mother goodbye and set off for school, a mere two blocks away. He never made it. Desperate to find him, his mother begins a vigil that lasts for days, then weeks, then months. She is treated first as a tragic figure, then as a grief-crazed hysteric, then as anreminder of the bad fortune that can befall us all. Against all hope, despite false leads and thedesertions of her friends and allies she believes with all her heart that somehow, somewhere, Alex will be found alive.

Beth Gutcheon builds a heartrending suspense that culminates in a climax you will never forget.

“A surprising depth of understanding.... A consistently intelligent piece of work.” — Ms. magazine

“Haunting, harrowing, and highly effective...a stunning shocker of an ending.... It strings out the suspense to the almost unendurable.” — Publishers Weekly

“Powerful...a body-blow of a novel.... Gutcheon [tunes] the tension to a shattering pitch.” — Kirkus Reviews

“This is exactly the way it would be if your child didn’t come home on time from school tomorrow.” — Los Angeles Times

“Gutcheon plays on our emotions with fiendish skill… the ending will leave you limp.” — Cosmopolitan