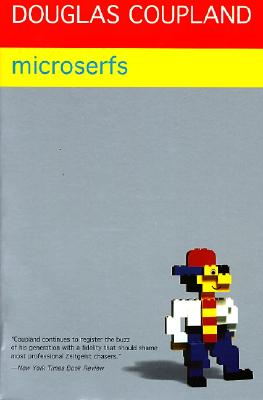 Narrated in the form of a Powerbook entry by Dan Underwood, a computer programmer for Microsoft, this state-of-the-art novel about life in the '90s follows the adventures of six code-crunching computer whizzes. Known as "microserfs," they spend upward of 16 hours a day "coding" (writing software) as they eat "flat" foods (such as Kraft singles, which can be passed underneath closed doors) and fearfully scan the company email to see what the great Bill might be thinking and whether he is going to "flame" one of them.

Seizing the chance to be innovators instead of cogs in the Microsoft machine, this intrepid bunch strike out on their own to form a high-tech start-up company named Oop! in Silicon Valley. Living together in a sort of digital flophouse --"Our House of Wayward Mobility" -- they desperately try to cultivate well-rounded lives and find love amid the dislocated, subhuman whir and buzz of their computer-driven world.

Funny, illuminating and ultimately touching, Microserfs is the story of one generation's very strange and claustrophobic coming of age.

“The novel’s real fun is the frequent and rapidly fired pop-culture references that span the 70s, 80s and 90s...and Coupland uses them with relish.”
— Entertainment Weekly

Douglas Coupland is the author of twelve novels, including Generation X and Microserfs, and several works of nonfiction, including Polaroids from the Dead. He lives and works in Vancouver, Canada.