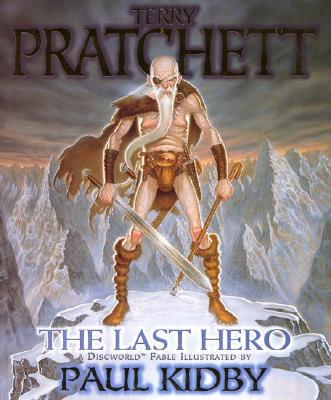 He's been a legend in his own lifetime.

He can remember the good old days of high adventure, when being a Hero meant one didn't have to worry about aching backs and lawyers and civilization.

But these days, he can't always remember just where he put his teeth...

So now, with his ancient (yet still trusty) sword and new walking stick in hand, Cohen gathers a group of his old -- very old -- friends to embark on one final quest. He's going to climb the highest mountain of Discworld and meet the gods.

It's time the Last Hero in the world returns what the first hero stole. Trouble is, that'll mean the end of the world, if no one stops him in time.

Paul Kidby became a freelance illustrator in 1986. Since then he has worked on projects ranging from computer game packaging to magazine covers. He began reading the Discworld novels in 1993 and was immediately inspired. He has produced, with Terry Pratchett and Stephen Briggs, numerous Discworld items, including Discworld Diaries, The Discworld Portfolio, cards, book covers, and calendars. He lives in England.