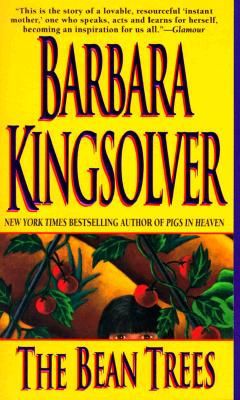 Barbara Kingsolver's 1988 debut novel is a classic workof American fiction. Now a standard in college literature classes across thenation, and a book that appears in translation across the globe, The BeanTrees is not only a literary masterpiece but a popular triumph—anarrative that readers worldwide have taken into their hearts. The Los Angeles Times calls The Bean Trees “the work of a visionary. . . . It leaves you open-mouthed and smiling.”

Praise For The Bean Trees: A Novel…

“The work of a visionary. . . . It leaves you open-mouthed and smiling.” — Los Angeles Times

“As clear as air. It is the southern novel taken west, its colors as translucent and polished as one of those slices of rose agate from a desert shop.” — New York Times Book Review

“So wry and wise we wish it would never end....The chatty, down-home audacity of Barbara Kingsolver’s remarkable first novel hooks us on the first page.” — San Francisco Chronicle

“The Bean Trees is the work of a visionary. . . . It leaves you open-mouthed and smiling.” — Los Angeles Times

"A major new talent. From the very first page, Kingsolver's characters tug at the heart and soul." — Ms.

“An astonishing literary debut....For a deep breath of fresh air, spend some time in the neighborhood of The Bean Trees.” — Cosmopolitan

"Idealistic and exhilerating, The Bean Trees is a book that combines the most careful craft with a moral code that is loving and expansive." — Philadelphia Inquirer

“This is the story of a lovable, resourceful ‘instant mother,’ one who speaks, acts and learns for herself, becoming an inspiration to us all.” — Glamour

“This funny, inspiring book is a marvelous affirmation of risk-taking, commitment and everyday miracles...An overwhelming delight, as random and unexpected as real life.” — Publishers Weekly

“A lively first novel...an easy book to enjoy.” — No Source