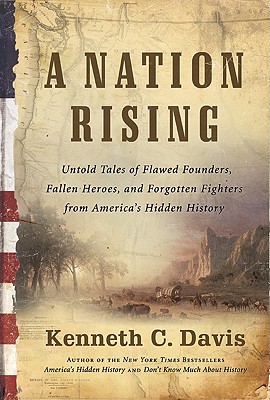 Following on his New York Times bestsellers America’s Hidden History and Don’t Know Much About History, Ken Davis explores the next chapter in the country’s hidden history: the gritty first half of the 19th century, among the most tumultuous in the nation’s short life.

Praise for America’s Hidden History: “American history in the vibrant narrative tradition of David McCullough.”
— Ron Powers, author of Flags of Our Fathers

“Davis is a fine writer who uses a fast-moving narrative to tell these stories well... This is an informative and enjoyable work.”
— Booklist

Kenneth C. Davis is the New York Times bestselling author of A Nation Rising; America's Hidden History; and Don't Know Much About® History, which spent thirty-five consecutive weeks on the New York Times bestseller list, sold more than 1.6 million copies, and gave rise to his phenomenal Don't Know Much About® series for adults and children. A resident of New York City and Dorset, Vermont, Davis frequently appears on national television and radio and has been a commentator on NPR's All Things Considered. He blogs regularly at www.dontknowmuch.com.