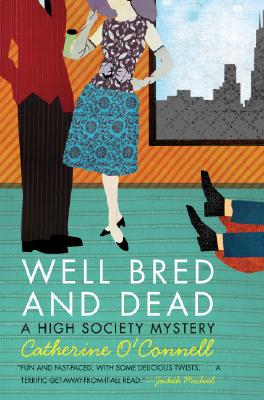 Newly widowed Pauline Cook was once the toast of the Windy City elite—but now she's practically broke. At least she's in better shape than her dear departed friend Ethan Campbell, whose corpse Pauline has had the misfortune to discover. A writer who chronicled the lives, loves, and ensembles of the Gold Coast's most elegant ladies, Ethan apparently took his own life—while inelegantly clad in old boxers, no less. And since no relatives are coming forward to claim Ethan's remains, it falls to Pauline to settle his final affairs . . . with her own dwindling funds.

However, there are things about Ethan's suicide that don't seem to add up: the ratty undergarments he "chose" to die in, for example . . . and the multiple birth certificates the police turn up in his apartment. Before she can truly lay her friend to rest, plucky Pauline's determined to get to the bottom of his increasingly suspicious death.

“A wry look at the lifestyles of the rich and an amusing mystery with a twist in its tail.” — Kirkus Reviews

“A hell of a storyteller, a master of plot, [and] a tart observer of the social scene.” — Frank McCourt

Catherine O'Connell divides her time between Chicago and Aspen, and sits on the board of the Aspen Writers' Foundation. A graduate of the University of Colorado School of Journalism, she is also the author of Well Bred and Dead.