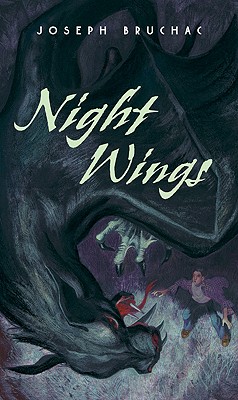 Praised as a “perfect book to gobble up in a single, sweaty sitting” by Booklist, this chilling middle grade novel from acclaimed author Joseph Bruchac is infused with suspense and heart-stopping action. Give it to fans of R. L. Stine’s Goosebumps series and readers anxious for well-crafted horror!

Night Wings follows a Native American boy named Paul who is forced to journey up a treacherous mountain and must come face-to-face with something even more terrifying and deadly than his surroundings.

Paul has always believed in the power of dreams. He knows that they are often warnings. Warnings that should be taken very seriously. Now his nightmare visions of a fearsome winged creature are becoming all too real.

And though Paul has always depended on the wisdom of his Abenaki ancestors’ stories to guide him, no monster tale will prepare him for the horror he is about to encounter. All alone. At the top of one of the most dangerous mountains in the world.

Sally Wern Comport has been making pictures professionally since the age of sixteen. Her images have been seen in the editorial, advertising, and publishing markets worldwide, and her work includes the picture book Brave Margaret: An Irish Adventure, by Robert D. San Souci. She lives in Annapolis, Maryland, with her studio partner -- husband and their two daughters, Taylor and Olivia, and she recently completed her graduate education at Syracuse University to further her passion for the art of illustration.

“Bruchac’s fast-moving tale is steeped in Indian lore that injects this otherwise straightforward thriller with a sense of meaning and even spirituality. A perfect book to gobble up in a single, sweaty sitting.”
— ALA Booklist

“The author brings Abenaki ways of life and thought in the modern world into sharp focus here.”
— Kirkus Reviews

“The intriguing Native lore, the realistic teen narrative, and cliff-hanger sentences that build suspense at the end of each chapter are signature Bruchac and will captivate readers.”
— School Library Journal
or
Not Currently Available for Direct Purchase
Copyright © 2020 American Booksellers Association