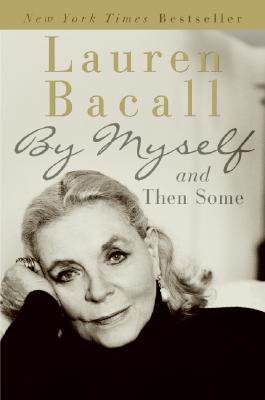 By Myself and Then Some

The epitome of grace, independence, and wit, Lauren Bacall continues to project an audacious spirit and pursue on-screen excellence. The product of an extraordinary mother and a loving extended family, she produced, with Humphrey Bogart, some of the most electric and memorable scenes in movie history. After tragically losing Bogart, she returned to New York and a brilliant career in the theatre. A two-time Tony winner, she married and later divorced her second love, Jason Robards, and never lost sight of the strength that made her a star.

Now, thirty years after the publication of her original National Book Award–winning memoir, Bacall has added new material to her inspiring history. In her own frank and beautiful words, one of our most enduring actresses reveals the remarkable true story of a lifetime so rich with incident and achievement that Hollywood itself would be unable to adequately reproduce it.


Praise For By Myself and Then Some…

“...Bacall...always made the most of what she had, as this memoir proves for the second time.”
— Chicago Sun-Times

“What amazing memories of and links to a glamorous and vanished era.”
— Daily Mail (London)

“...a fascinating story of one woman’s journey through life with an intimacy that’s sure to engage legions of readers.”
— Booklist

“In a word Lauren Bacall By Myself is terrific...and she wrote this book as she lived it.”
— Boston Globe

“...an enthralling account of her life...it is a book many people are sure to enjoy.
— Mosman & Lower North Shore Daily (Australia)

“BY MYSELF has some powerful moments...it is still a fine read.”
— Denver Rocky Mountain News

“The back story of Bogie and Bacall is just one of the many reasons to pick up a copy...
— Denver Rocky Mountain News

“Backstage Hollywood takes center stage in BY MYSELF AND THEN SOME.”
— Lisa Ko, author of The Leavers

“...this new version of her life is as stimulating as it was when it first appeared in 1978.”
— Richmond Times-Dispatch

“Any fan of Bacall or Bogart will want to read this update...highly recommended.”
— Library Journal

“The book’s a must-read. The lady’s a class act.”
— BPI Entertainment News Wire

“...her fans will not be disappointed.”
— Time Out New York

Lauren Bacall was spotted by Howard Hawks when she was on the cover of Harper's Bazaar at eighteen. Her distinctive title -- The Look -- followed her first film To Have and Have Not with Humphrey Bogart, and together they had one of the greatest love affairs of all time. Bacall went on to make more than fifty films and continues to be a major presence in the industry. She is the recipient of many lifetime achievement awards, two Tony awards, two Golden Globes, and an Oscar nomination. She is the mother of Stephen, Leslie, and Sam, and continiues to live in New York City with her beloved papillon, Sophie.