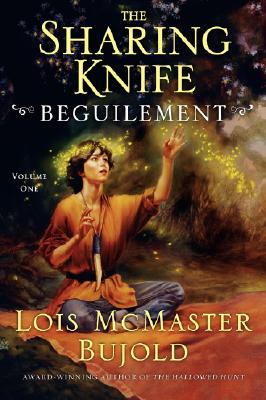 The Sharing Knife Volume One

“Bujold builds a better fantasy romance with compelling characters and the fascinating clash between their cultures, she a farmer’s daughter, he an adventurer on the trail of a deadly demon.”—Locus

One of the most respected writers in the field of speculative fiction, Lois McMaster Bujold has won numerous accolades and awards, including the Nebula and Locus Awards as well as the fantasy and science fiction genre’s most prestigious honor, the Hugo Award for Best Novel, four times (most recently for Paladin of Souls). With The Sharing Knife series, Bujold creates a brand new world fraught with peril, and spins an extraordinary romance between a young farm girl and the brave sorcerer-soldier entrusted with the defense of the land against a plague of vicious malevolent beings. Meet Fawn Bluefield and Dag Redwing Hickory in Beguilement, the first book in Bujold’s unforgettable four-volume fantasy saga, and witness the birth of their dangerous romance—a love threatened by prejudice and perilous magic, and by Dag’s sworn duty as Lakewalker patroller and necromancer.


Praise For The Sharing Knife Volume One: Beguilement…