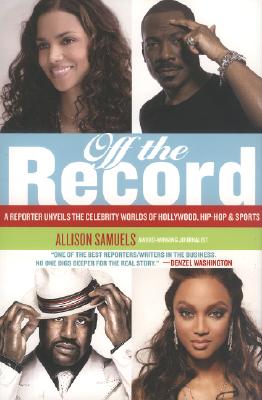 A Reporter Unveils the Celebrity Worlds of Hollywood, Hip-hop, and Sports

Off the Record is an insightful, funny, and oftentimes moving behind-the-scenes look at the boldfaced names of Hollywood, hip-hop, and sports. Featuring celebrities such as Whitney Houston, Eddie Murphy, Lil' Kim, Tyra Banks, Alex Rodriguez, Shaquille O'Neal, Whoopi Goldberg, Snoop Dogg, and Denzel Washington, Off the Record goes beyond the red carpet with stories that capture who they are as people—sometimes vulnerable, sometimes inspiring, but always human.

Moved by a Barbara Walters interview that she saw as a young girl, Allison Samuels began her journalism career as a college student, with an impromptu interview of Francis Ford Coppola while visiting the film set for Gardens of Stone. She has since evolved into an esteemed reporter at one of the top news magazines in the world. Samuels's stories have received national attention, including her cover feature on Kobe Bryant's alleged rape charges, and a dialogue-provoking cover story on the state of black women in America that featured then rising international superstar Beyoncé and controversial former daytime talkshow host Star Jones.


Praise For Off the Record: A Reporter Unveils the Celebrity Worlds of Hollywood, Hip-hop, and Sports…

“One of the best reporters/writers in the business. No one digs deeper for the real story.”
— Denzel Washington

“Insightful and amusing stories that never made it into print....funny and compelling.”
— Ebony

Allison Samuels is an award-winning Newsweek correspondent who has covered sports and entertainment since 1996. Samuels is a member of the National Association of Black Journalists, the Big Sisters of America, and the UCLA Black Studies Department board of directors. She lives in Los Angeles.