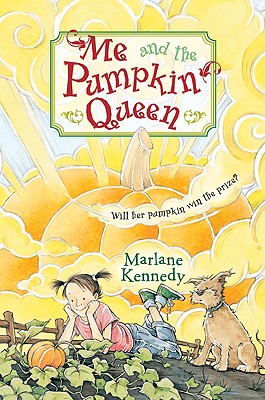 Me and the Pumpkin Queen

It's just something she has to do.

Mildred has always dreamed of growing a one-thousand-pound pumpkin to enter in her town's Pumpkin Show. Her aunt Arlene thinks she's obsessed, but Mildred prefers to think of herself as focused. And growing giant pumpkins is way more interesting than boys or clothes or the other girly things Aunt Arlene wants her to like. She's been trying for four long growing seasons—ever since her mama died—and every one has ended in disaster. It's not easy, especially with dogs who don't realize how delicate seedlings are, and tornadoes that could destroy months of work, and most people thinking that an eleven-year-old doesn't stand a chance. But Daddy believes in Mildred, and so does her best friend, Jacob. Maybe this will finally be her year.

Marlane Kennedy moved to Circleville, Ohio, at age eleven. She participated in many Pumpkin Show parades as a child, but never tried growing her own giant pumpkin. But after writing Me and the Pumpkin Queen, she planted her own Howard Dill's Atlantic Giant seed and grew a 250-pounder, pictured above, that took fifth prize in her local fair. Marlane Kennedy is also the author of The Dog Days of Charlotte Hayes. She lives in Wooster, Ohio, with her husband and three children.